Why is innovation in education so crucial today?

In response to the question, I thought it would be interesting to synthesize my reading from the book with what others have to say about innovation’s role not only in education but in life. Often, those who we view as leaders are those who we also consider pioneers; they’re constantly pushing the paradigm and advocating for risk-taking and innovation. For this blog post, I’d like to share the words of five pioneers that have inspired my thinking.

5. “If we teach today’s students as we taught yesterday’s, we rob them of tomorrow.” – John Dewey 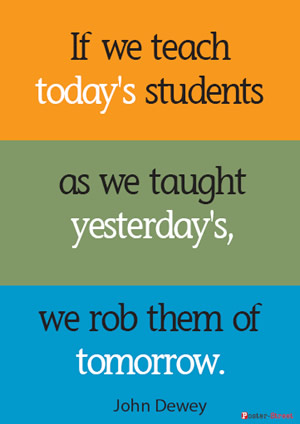 4. “The principal goal of education in the schools should be creating men and women who are capable of doing new things, not simply repeating what other generations have done; men and women who are creative, inventive and discoverers, who can be critical and verify, and not accept, everything they are offered.” – Jean Piaget

3. “I don’t mean to say being wrong is the same thing as being creative, but what we do know is if you’re not prepared to be wrong, you’ll never come up with anything original.” – Sir Ken Robinson

2. “We teach children to color inside the lines, and then expect adults to think outside the box.” – Frank Sonnenberg

1.  “Here’s to the crazy ones, the misfits, the rebels, the troublemakers, the round pegs in the square holes, the ones who see things differently. They’re not fond of rules and they have no respect for the status quo. You can quote them, disagree with them, glorify or vilify them. About the only thing you can’t do is ignore them because they change things. They push the human race forward. While some may see them as the crazy ones, we see genius. Because the people who are crazy enough to think they can change the world are the ones who do.” – Steve Jobs

Confessions of an Extroverted Introvert

What We Model Is What We Get